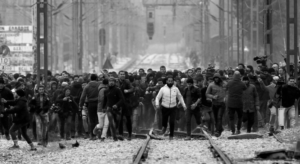 The publication of our pamphlet entitled Vogelfrei.[1] Migration, deportations, capital and its state aims at contributing to the analysis and critique of the politics of the EU and the Greek state on the control and biopolitical management of migration from a proletarian standpoint. The great increase of the migration movement towards the European Union during the last two years, which was mainly caused by the intensification of the military conflicts in Syria, Iraq and Afghanistan, has been confronted on the one hand with an intensification of border policing up to the point of its militarization and on the other hand with the formation of a new political and legal framework through the agreement between EU and Turkey on the 18th of March of 2016, which negates basic principles of the international asylum law. Our interest in the issue of migration as a form of the international mobility of labour, as a form of permanent primitive accumulation and as a form of autonomous proletarian activity is not academic. On the contrary, we seek to equip ourselves with theoretical instruments which may be proven useful for the development … Read the rest